Though the year 2o12 had a lot to offer me personally, I can’t help but not go back to some not so happy personal incident(s); plus of course the plight of the 23 year old woman who was subjected to gangrape and subsequent inhuman torture at the hands of 6 individuals recently in the Capital. What happened afterwards in terms of protests, and the way the protest were handled by the government also threw up some unpleasant questions which needed answers, and which needed them fast.

Be you a student, entrepreneur, activist or leader (corporate/ government) who might happen to read this post;  I sincerely believe that we all as individuals, and a country, are capable of achieving much greater things. As we all condemn the act, and seek justice and fairness for such untoward incidents, let us also take a look inside and try to understand what makes individuals, who are not so much different from us in flesh and bone, commit such acts – and therein try to nip the issue at the bud.

A solution that might work in the long run (not saying it’s the fastest way to bring about change) is to create the right environment at the family level wherein we consciously seed out patriarchal/ matriarchal traits which differentiate between a boy and a girl  (one which gives privileges to one child more than the other, at different levels/ instances/ ages etc); treating the children equally in terms of love and care, and enabling both to find and pursue their greatness in thoughts, words and deeds – By doing this, we might, perhaps, be able to achieve an environment wherein more men respect women and look at them as fabulous individuals, just like themselves. In such an environment, more men should, and will, understand that when it comes from a woman – a ‘no’ means ‘NO’. (Below is a campaign which I had come across sometime back, and which shows how powerful the idea is in such an environment). 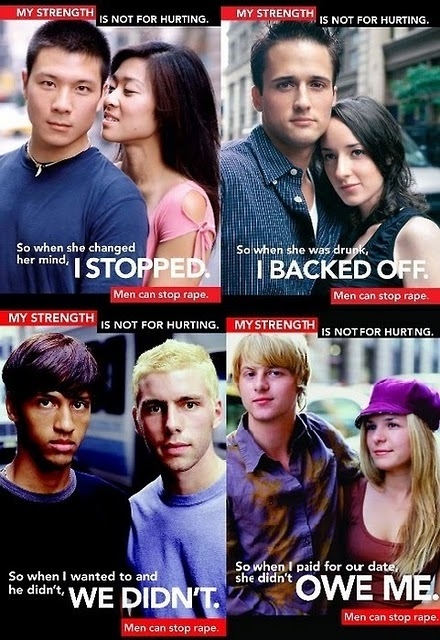 Recently had the opportunity to read Dan Ariely‘s book ‘Predictably Irrational’ wherein a part of the book discussed experiments conducted on students across institutions such as Harvard, MIT, Berkeley etc  on as to how our minds behaved irrationally (and in sharp contrast to the beliefs and decision making abilities we might hold as conscious individuals) in a state of sexual excitation.*

One obvious learning (from the book): It’s easier to walk away from something you might regret doing, when your mind is at a lower level of excitement – Applies to any area of your life including maintaining ethics in business dealings, when you still have not got seriously hooked to drugs or whatever-new-thing-is-out-there-that-supposedly-makes-you-cool (well, it doesn’t), and not letting down your parents and rest family.

And yes, let’s not make it just a Government or Police thing to do – even though the Government and the Police needs to do more than just washing off it’s hands off the responsibility due to them as Decision makers and Protectors of, and for, the Democracy of India – The issue runs much deeper and needs to be looked at closely when we think of the kind of environment that ‘exists’, and the kind of environment or country that we and the coming generations would rather ‘live’ in.

Praying for the 23 year old woman (Jyoti Singh Pandey) who passed away on 29th Dec 2012 – May God bless her soul, and give her family and friends the strength and courage to move on.

* No disrespect to the individuals from the institutions covered in the book, and which were mentioned above; more so because I have had the honor and the privilege of consulting and working with a few brilliant minds out of these and similar leading institutions of learning.

The fact that individuals from such institutions (who more-often-than-not set very high standards for themselves in terms of commitment and self-discipline) can show such results in these experiments, reveals a bit about what the outcomes might be when it comes to other individuals who might not have set such standards for themselves – Thus, making the case stronger for why we need to be more aware, and control such circumstances with care.